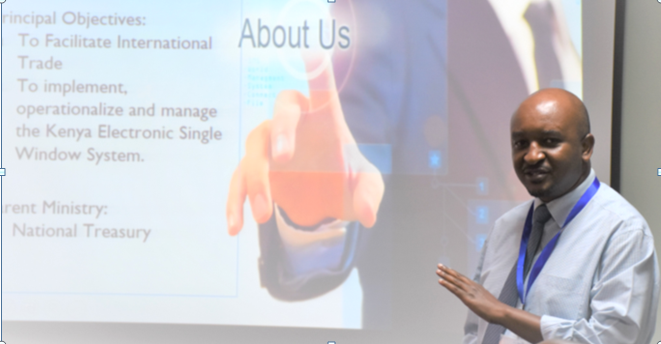 In May, delegates from 76 countries including Kenya met in Geneva, Switzerland for negotiation on new global rules governing electronic e-commerce which includes the Electronic Single Window System known locally as the Kenya TradeNet System.

The global forum hosted by the World Trade Organisation (WTO) was aimed at enhancing opportunities and addressing challenges of e-commerce in both developed and developing countries. The concern has been the absence of multilateral rules regulating the rise of digital trade which is having a tremendous impact on businesses and consumers across the world, both in developed and developing countries.

KenTrade CEO Amos Wangora who is the President of General Assembly of Africa Alliance of E-commerce is among the strong proponents of having electronic commerce rules that binds all World Trade Organisation member countries instead of the current situation where traders in digital economies have to rely on a patchwork of rules agreed by some countries in their bilateral or regional trade agreements. His school of thought believe that the adoption of a new rule will open up opportunities besides addressing the challenges on regulating e-commerce.

Kenya and Africa’s position has not been well articulated but EU via the EU Trade News,released its proposals  whose highlight includes some of issues that have been raised in Kenyan forums on KenTrade flagship, the Kenya TradeNet System. The highlights include the guarantee of validity of e-contracts and e-signatures, strengthening consumer consumers’ trust in the on-line environment, adopt measures to effectively combat spam and tackle barriers that prevent cross-border sales, address forced data localisation requirements while ensuring protection of personal data. EU also proposes prohibiting mandatory source code disclosure requirements, permanent ban on customs duties on electronic transmissions, adherence to the principle of open internet access, upgrade of existing WTO disciplines on telecommunication services to ensure that they are fit to support today’s vibrant internet ecosystem that is the main enabler of e-commerce and improve market access commitments in telecommunication and computer related services.